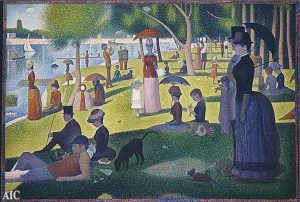 A Sunday on the Island of La Grande Jatte, by Georges Seurat, is considered a classic example of the artistic style known as pointillism. It consists entirely of small dots and tiny brushstrokes. If you and I were to step up close to the painting and limit our view—our perspective—to only a few square inches of the painting (Fig. 1), we would see dots of paint randomly distributed over the canvas. There would seem to be no rhyme or reason for why the colors are distributed the way they are. However, if we were to step back so that we could see the whole picture at once (Fig. 2), we would instantly see how those seemingly random points of paint contri­bute to the entire painting. From a broad perspective, we see a great work of art; from a limited perspective, we see only chaos. What we see depends on which per­spective we choose to take.

Limited perspectives and invalid assumptions often go hand-in-hand. Some­times the perspective we have chosen to take helps determine which assumptions we choose to make. From the limited perspective, it is easy to assume that the painting has no rhyme or reason to it. A child who is bitten by the first dog he meets is likely to assume that all dogs bite. The child is drawing an invalid assumption from a limited perspective, from only one experience. If the child were to broaden his per­spective by interacting with other dogs, he would see that not all dogs bite, only some do. By limiting their perspective to only a few analogues, the documentarians assumed that the authors of historical works always referred to themselves in the first person. By broadening our perspective to include other analogues, including one provided by the documentarians themselves, we perceived that the assumption was completely invalid.

Sometimes the perspective we choose to take is determined by the assump­tions we have chosen to make. The assumption that the switch is the only cause for why the lights went out can keep a person from seeing the answer that had been there all along and so limits that person’s perspective. The dissectionists’ assumption that a single author would never create anomalies such as differences in style, doub­lets, contradictions and conflicting theological viewpoints has limited their perspec­tive and kept them from seeing the answer that has been there all along. It has kept them focused on the dots and not on the whole picture. This is why, when they look at the Pentateuch or the Iliad, they do not see what is really there: a great literary work of art. All they see is chaos.

Because they do not see the whole picture, the dissectionists fill in the mis­sing parts with their imagination. And because what historical facts we do have about the authorship of these works tend to support the traditional views, they ignore these facts and contrive imaginary histories of how these works came to be. They then claim that their conclusions have been “scientifically” derived. The problem is that when we use their methods to scientifically analyze a literary work (such as Friedman’s book) the history of which has been independently and objectively con­firmed, we often obtain results which we know cannot be true. We are compelled to see a diversity of documents when we know there was only one. We are compelled to see an abundance of authors when we know there was only one. We are com­pelled to see an excess of editors when we know there were none. The analysis simply cannot reconstruct the known history of the work.

The failure of scientific analysis to reconstruct the history of Friedman’s book is not an isolated example. C.S. Lewis, an author whose works have run the gamut of subjects and genre from scholarly studies in literature to science fiction, from the­ological treatises to children’s fantasies, from essays in literary criticism to radio speeches, saw the history of his works reconstructed through scientific analysis and testified to the invalidity of it all in a speech he delivered to theological students at Cambridge University:

What the value of such reconstructions is I learned very early in my career. I had published a book of essays; and the one into which I had put most of my heart, the one I really cared about and in which I discharged a keen enthusiasm, was on William Morris. And in almost the first review I was told that this was obviously the only one in the book in which I had felt no interest. Now don’t mistake. The critic was, I now believe, quite right in think­ing it the worst essay in the book; at least everyone agreed with him. Where he was totally wrong was in his imaginary history of the causes which pro­duced its dullness.

Well, this made me prick up my ears. Since then I have watched with some care similar imaginary histories both of my own books and of books by friends whose real history I knew….

Now I must first record my impression; then, distinct from it, what I can say with certainty. My impression is that in the whole of my experience not one of these guesses has on any one point been right; that the method shows a record of 100 per cent. failure. You would expect that by mere chance they would hit as often as they miss. But it is my impression that they do no such thing. I can’t remember a single hit. But as I have not kept a careful record my mere impression may be mistaken. What I think I can say with certainty is that they are usually wrong.

And yet they would often sound—if you didn’t know the truth—extremely convincing. Many reviewers said that the Ring in Tolkien’s The Lord of the Rings was suggested by the atom bomb. What could be more plaus­ible? Here is a book published when everyone was preoccupied by that sin­ister invention; here in the centre of the book is a weapon which it seems madness to throw away yet fatal to use. Yet in fact, the chronology of the book’s composition makes the theory impossible. Only the other week a reviewer said that a fairy tale by my friend Roger Lancelyn Green was influ­enced by fairy tales of mine. Nothing could be more probable. I have an imaginary country with a beneficent lion in it: Green, one with a beneficent tiger. Green and I can be proved to read one another’s works; to be indeed in various ways closely associated. The case for an affiliation is far stronger than many which we accept as conclusive when dead authors are concerned. But it’s all untrue nevertheless. I know the genesis of that Tiger and that Lion and they are quite independent.

Now this surely ought to give us pause. The reconstruction of the his­tory of a text, when the text is ancient, sounds very convincing. But one is after all sailing by dead reckoning; the results cannot be checked by fact. In order to decide how reliable the method is, what more could you ask for than to be shown an instance where the same method is at work and we have facts to check it by? Well, that is what I have done. And we find, that when the check is available, the results are either always, or else nearly always, wrong. The ‘assured results of modern scholarship’, as to the way in which an old book was written, are ‘assured’, we may conclude, only because the men who knew the facts are dead and can’t blow the gaff.1

Is there proof that Jesus rose from the dead? Find out here.